Welcome to the Florida Bar, Annalise! 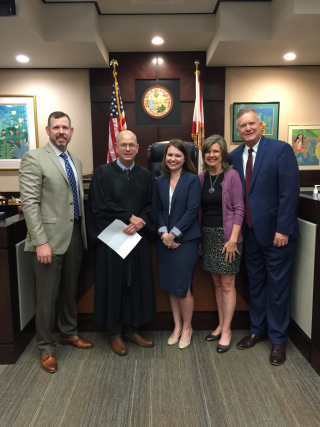 On September 20, 2019, Chief Judge Jonathan Sjostrom administered the Oath of Attorney to our firm’s new Associate Attorney, Annalise Reeves Kapusta.  Annalise is now licensed as an attorney and counselor at law and is admitted to practice before all the courts of Florida.  Pictured, from left to right, are Edward W. Wood, Judge Sjostrom, Annalise R. Kapusta, Elizabeth J. Maykut, and Kimberly L. King.

Annalise R. Kapusta joined King & Wood, P.A. upon her graduation from the Florida State University College of Law (J.D., magna cum laude) in May 2019.  At FSU Law, Ms. Kapusta was a member of the Editorial Board of the Journal of Land Use and Environmental Law and was a member of the Mock Trial Team.  She served as a teaching assistant to the late President Emeritus and Professor Talbot “Sandy” D’Alemberte and as a law clerk for Administrative Law Judge Bram Canter.  She received four book awards and earned an Environmental Law Certificate.  During her third year of law school, Ms. Kapusta served as a Florida Gubernatorial Fellow in the Office of the Chief Inspector General and received the 2019 Governor Jeb Bush Award for Outstanding Achievement.

Welcome to the Florida Bar, Annalise!